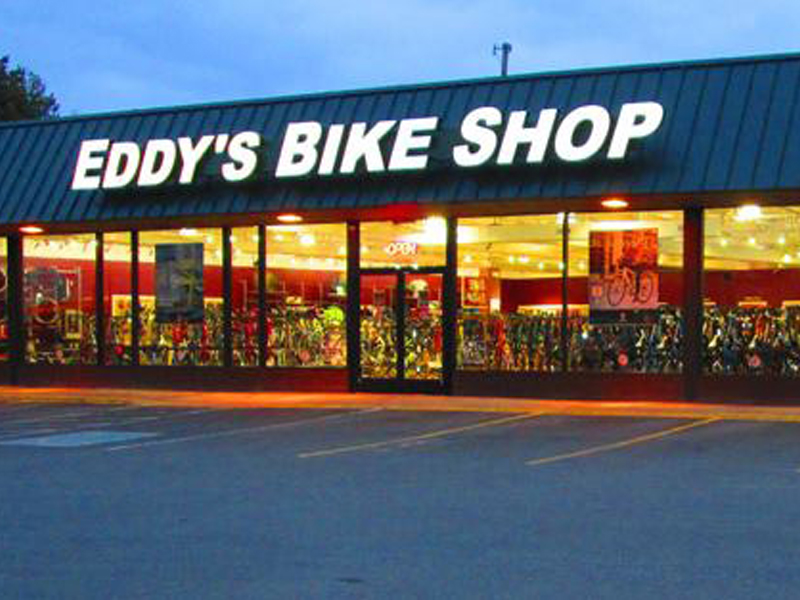 Eddy’s Bike Shop is celebrating 75 years in business, starting with one store in Stow, Ohio, in 1940. It was a general store at that time, switching focus to bicycle experts in the early 80s. The family-owned, third generation company has expanded to four Northern Ohio locations, with lucky North Olmsted included, for the last 20 years. Our North Olmsted store has undergone three expansions in the last four years to the present 10,000 jam-packed square feet you can visit today.

This company is the definition of full service. From buying any one of several types of bikes, fitting for bikes, repairs and an exciting assortment of gear – to youth clinics to learn mountain biking – to serious racers’ assistance along the courses of competitions all over the area!

Eddy’s goal is to get more people on bicycles – starting with their own employees who are rewarded with incentives to commute to the store on their bikes. Eddy’s also promotes “Bike Nights” at several eateries, including Fat Head’s locally, where if you ride your bike to the restaurant on Tuesdays until September 1, you get a 15% discount from your food bill AND a chance to win a new bike. Bike rack at the restaurant.

They are also supporters of Bike Cleveland – which is a consortium of several bike groups that have joined forces to bring better biking conditions, information and biking activities to the Cleveland area. Check them out here: http://www.bikecleveland.org/

According to Jason Kuhn, marketing, advertising and graphic designer for Eddy’s, there is currently a practice where when some wider roads are being resurfaced, the number of lanes are reduced by one, to make bike lanes along each side of road. This is occurring more and more in our area, bringing younger people to our suburbs! (If you build it they will come!) This change in lanes also slows the traffic down a little, making everyone safer all around. How cool would it be to be able to ride to surrounding suburbs safely?

What’s new and exciting in the bike shop? The fatbike, which is so named for its huge tires, which enable the rider to navigate through snow, over ice and bumpy terrain. Obviously a great idea for our area!

If you are a regular customer at Eddy’s, you know what a treasure we have at 25140 Lorain Road. If you are not a customer, I recommend that you check them out soon. There is something for everyone at Eddy’s Bike Shop – every member of your family!