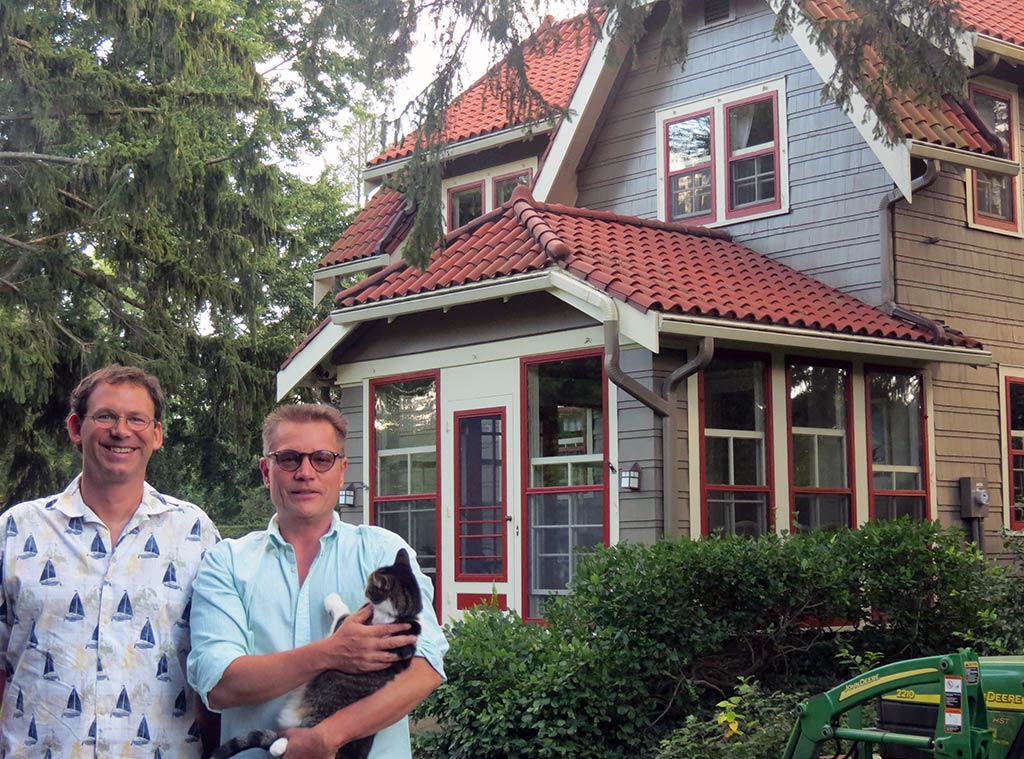 Meet Jim Morse and Dan Hocevar, owners of the Charles Alden Seltzer House which was designated a historical landmark in 2013. Their purchase of the property rescued  this historical gem from the potential threat of commercial development and they have been painstakingly restoring it ever since.

For those not familiar with Charles Seltzer, he was a notable figure in both North Olmsted and the nation. He was a council member and two-term mayor during the Great Depression.  He was a widely published author of western stories and novels that several later became feature films in the early days of Hollywood. At his home, Mayor Seltzer held mayor’s court, developed his plans to create a municipal bus line and made decisions with a broad impact on North Olmsted.

The Seltzer property has several unique architectural components not found elsewhere in North Olmsted. The house architecture is a blend of Craftsman and Spanish Colonial Revival style. Highlights include a Spanish tile roof, a stone fireplace that represents the 48 continental states, hardwood floors, extensive oak paneling, coffered ceilings in several rooms, an elliptical barrel vault ceiling in one wing, a second floor skylight, and wormy chestnut paneling and hardwood floors in the basement.

Jim and Dan met on a canoe trip on the upper Cuyahoga River and eventually made North Olmsted their home. They purchased the Seltzer property in 2009. Jim is a solution architect for a San Francisco-based mobile banking solution.  A solution architect is an IT person concerned about technical design.  Dan is a product technologist for Nestle and is working on future products for them.

Besides their jobs, they spend a lot of time doing restoration work on their home and starting up Seltzer Orchard, which will grow heirloom apples, berries, etc.  Jim sails on Lake Erie and is currently vice-chair of the North Olmsted Landmarks Commission. Dan volunteered on North Olmsted’s Committee for the Future, the master planning committee for the city.

What would you tell a new resident about North Olmsted?  How would you suggest they get involved in the community?

‘It starts with one word:  Welcome!  If you live in North Olmsted and someone new moves in, go say hello!  The place to start is one neighbor at a time.”

Do you have a favorite “spot” in North Olmsted?

“There should be a rule on this question that you can’t answer your own property!  In our case, the answer is our property.  We are lucky to live on over 3 acres and in a beautiful house. We can take a serious walk viewing flower gardens and an apple orchard without ever leaving here.  There’s also a workshop to create things.”  The two also enjoy social time at the house of Beth and Tim Roshetko, their neighbors.  “They foster a sense of community in our neighborhood and we look forward to time there.”

What would you like to see in North Olmsted’s future?

“North Olmsted was on the original coast- to-coast air route.  It has the potential to be on the information superhighway, and it seems more and more North Olmsted residents work in that capacity – in North Olmsted”.