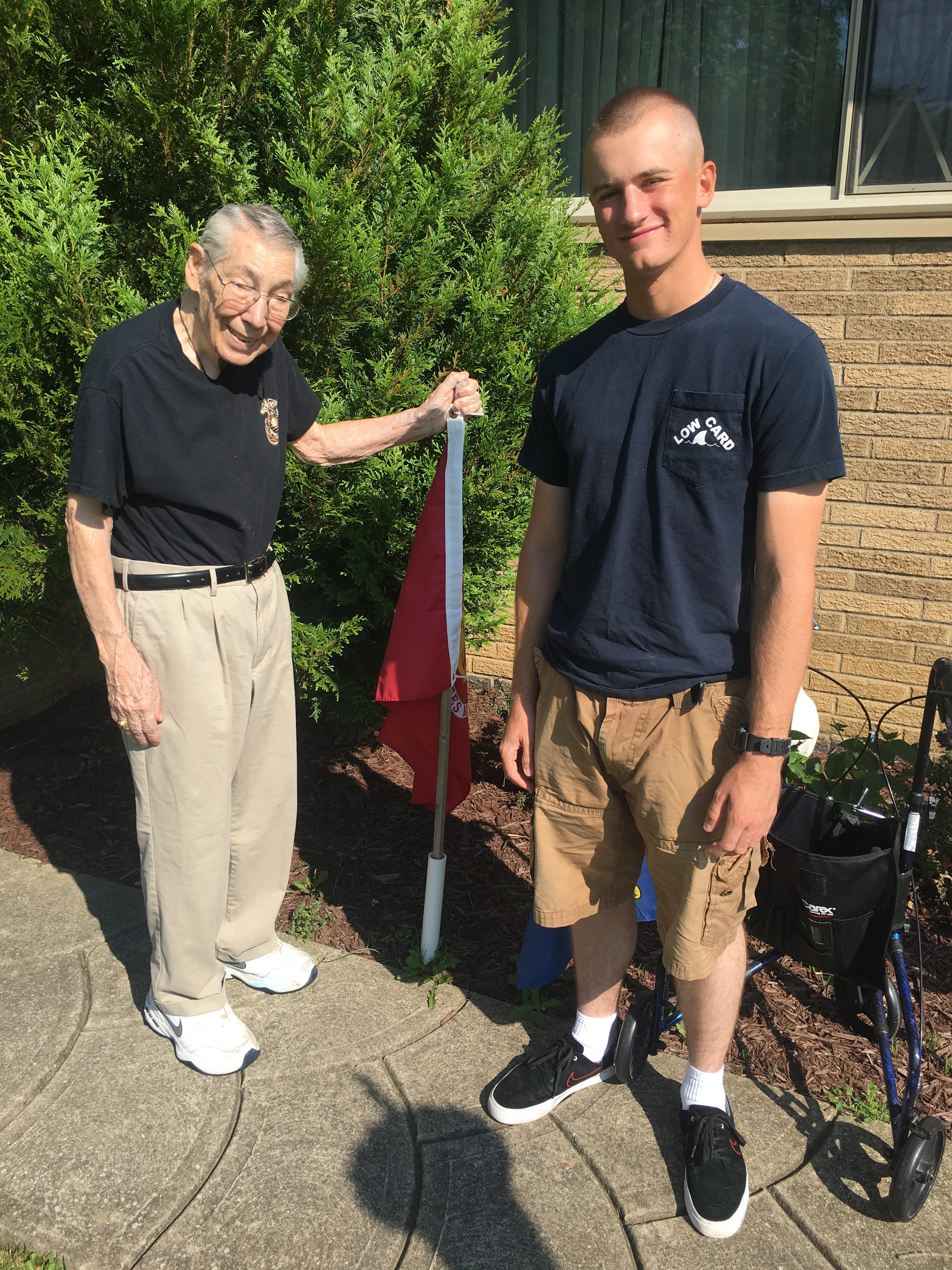 David Wooster and Joe DeSalvo are two local Marines born over 70 years apart connected by a shared commitment to their country.

The United States Marine Corps has been serving and protecting the United States for over 240 years as the nation’s elite crisis response force equipped for any situation on any frontier. As a tight-knit fraternity of brothers in arms, Marines can be found in all corners of the globe. However, it is not very often that you find Marines living on the on the same street with service time separated by over seven decades.

Upon meeting Private David Wooster of USMC Platoon 3066, he shares that he is recently graduated from Recruit Training in Parris Island, South Carolina and is anxiously awaiting his first assignment ahead of more advanced training. “It was a grueling 13 weeks on Parris for all of us,” the 18 year-old David says. “Recruit training feels like both a marathon and sprint all at the same time, but it’s the reason why Marines are the toughest of the tough.” As we walk over to visit with our special guest, David expands on why he chose to join the Marines: “I knew that I wanted to serve my country, so why not join the best of the best? It was an easy decision for me once I met with my recruiter and learned more about the Corps.”

We arrive at the house of Private First Class Joe DeSalvo, a 91 year-old Marine Corps veteran and family friend of the Woosters. Joe greets us both with a warm ‘hello’ and immediately takes us past a remarkable collection of Marine Corps memorabilia to a small bulletin board in his kitchen displaying various pictures, medals and pins from his time in the Marine Corp. “I also trained on Parris Island, earning rank as Private First Class and serving in the 6th Marine Division,” says Joe. “Although the war (World War II) was basically over before I enlisted, the official peace treaty wasn’t signed until a month after I joined on. For that, I am considered a World War II veteran without ever seeing a minute of active combat!” Joe continues on to talk about his time in China in 1946 as part of the 6th Marine Division’s peaceful mission to assist the Chinese in rebuilding and stabilizing following the mass destruction caused by the war. “It was my only deployment with the Marines, but I’m proud to have been a part of the efforts to rebuild after the war.”

Joe’s various medals, regalia and pictures from his service

Looking ahead, David says he now expects to attend specialized training to become a mechanic. “Following recruit training, we are sent down different training tracks,” he explains. “Some guys from our unit will be going for advanced infantry training while others will be trained in non-infantry roles, knows as Military Occupational Specialties, which includes my future job as a mechanic among many other important roles. Marine combat and infantry training are also required based on your specific MOS.” When asked what his biggest struggle was upon arriving at recruit training, David laughs and says that he wishes he would have taken his physical training more seriously ahead of time. “My advice to incoming recruits is to take PT seriously and use that time to get in the best shape possible. It will make your life much less miserable when it’s time for drills and exercises.”

As for his fondest memories from his time on Parris Island, David’s response is immediate and direct: “The camaraderie that we all shared during those hot days and long nights is something I wouldn’t trade for the world. I now know that I am equipped to handle whatever is thrown at me and can’t wait to begin my career in the United States Marine Corps.”

Author’s Note: It is with a heavy heart that we share news of Joe DeSalvo’s passing at the age of 91.  The complete obituary may be read here. Joe will be missed by all who knew him.

The City of North Olmsted would like to thank all active duty members and veterans of the United States Armed Forces for their service to our country. We are forever grateful for your service and sacrifice.