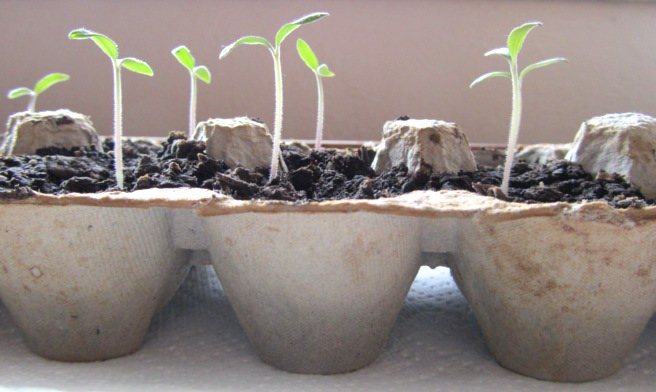 Editor’s Note: North Olmsted SITES student Randy Johr was tasked with developing an exhibit on any environmental topic for Earth Fair 2019. He chose REUSE. We asked him to share reflections on his experiences in researching the subject, creating and testing various reuse options and presenting this information to the community.

Sitting down behind my table inside the North Olmsted Community Cabin, I was ready to answer as many questions as I could. Laid out carefully were various contraptions made of paper and plastic, bottles of soap and glass jars lining the edges. A small crowd of people meandered among the different stalls and exhibits, reading about pollution control, buying local honey and examining dried insects in jars. As I got up to water my tomatoes, a man approached. “So… recycling huh?” I smiled and eagerly explained to him the nature of my table and its importance.  Several minutes later, another passerby asked again if the topic was recycling, and after that another. Above all other comments and questions, that was the query of the day. At first I was disappointed that so many assumed my table was about recycling, but I soon realized the implication; I had been right on the money with my choice of what topic to tackle at Earth Fair. Among the three big R’s, reducing and reusing really had been thrown to the curb in the public mind.

In 2019, recycling has become a generally accepted facet of civic duty. In a world where there may be disagreement about the level of government involvement, keeping the world clean is generally a bipartisan issue. The first word that comes to people’s lips when prompted with the idea of environmentalism is unsurprisingly “recycling.” Putting plastic bottles in a separate bin, bagging excess paper scraps or collecting pop cans is not an uncommon practice for most Americans.

Unfortunately, a lot of those items are still thrown in the trash. According to the EPA, plastics constituted around thirty-four and a half million tons of municipal solid waste (MSW) in 2015 alone. We recycle as best we can—at least we think we do—but there are still many materials that either slip under the radar or simply cannot be recycled, adding unnecessary volume to landfills.

In order to reverse this trend, reducing and reusing cannot be forgotten. Whether something can be recycled is a question that never has to be raised if it is never discarded in the first place. A great way to keep material out of landfills and the environment is to reuse it. Plastic bottles can be remade into bird feeders, planters, sprinklers, crafts, pencil cups and a myriad of other things. Glass and aluminum products have similar uses, as well as having the added benefit of being reliable and resilient. Giving a second life to your trash will not only help the environment but your wallet as well.

In a similar way, reducing is just as crucial. Don’t buy stuff that will create a lot of trash in the first place! Buying in bulk reduces plastic and paper packaging, and being a conscientious shopper means choosing glass or cardboard packaging over plastic as well. If reducing and reusing are put into practice well, they are far better first choices than recycling.

As human beings, we have the duty of stewardship over this earth. We are blessed with a world that is both beautiful and intricate. If there are ways within the scope of reason and the reach of our power to keep it clean, we should be obligated to keep it that way. Recycling is certainly one of those tools with which we can conserve energy and resources, but we would be foolish to ignore the often simple routes we can take to reduce and reuse in the first place.

The success of my table spawned from the ignorance that most of us find ourselves in when it comes to these issues. Recycling by its very nature is very easy to do, so it’s not surprising that it has come to be the go-to in-home environmental duty of the year. We must be active in our choices, shrinking our energy footprint using all of those three R’s we have been taught since elementary school. This process of brainstorming, research, planning and construction has given me a newfound appreciation for the intricacies of waste management, and I believe that a real difference could be made if more people were to be more conscious of their contribution.