Sometime before 1815, Elijah Stearns, a farmer and a Revolutionary War veteran, and his son David, just then reaching adulthood, concluded that their family’s future in Vermont was bleak. Their concerns were likely related to the impact that the War of 1812 was having upon their lives. As a lot of New Englanders did in these difficult times, despite the dangers posed by the new war, Elijah and David decided to move their family to northeast Ohio, where land for farming was advertised as good, cheap and plentiful. They planned to buy a little over a thousand acres of land and to create homesteads there for David and his five brothers, and perhaps some retirement land for Elijah and his second wife.

Elijah and David learned that the estate of Aaron Olmsted had a large amount of land for sale in northeast Ohio. The land was located in an area of the state then called the Connecticut Reserve (later “Western Reserve”), because it had been given to Connecticut in 1786 by the federal government. Connecticut turned around and sold the land to a company of private individuals organized as the Connecticut Land Company. In 1795, Aaron Olmsted, a sea captain, successfully bid to purchase over 14,000 acres of this land located in a township west of Cleveland then known simply as “Township 6, Range 15.”

Olmsted had to wait years to complete the purchase because of the presence of Native Americans on the land. It wasn’t until 1805, when a treaty was signed by the United States government and several Native American tribes, that lands in the area became available for settlement. Unfortunately, Olmsted died in 1806 before completing the purchase. His death set into motion a series of legal actions that made it difficult for anyone to get clear title to the land for the next two decades.

The legal proceedings resulting from Aaron Olmsted’s death had been under way for almost a decade, when in 1815 Elijah Stearns, David, and David’s younger brother, Alva, made the 500 mile trip on horseback from Dover, Vermont to inspect the land they intended to buy. It lay in the northern part of Township 6, Range 15, west of the Rocky River, and along a trail on a ridge that ran from the river valley to the western edge of the township. Today, that trail consists of two roads in North Olmsted–Butternut Ridge Road from Columbia Road to Lorain Road, and Lorain Road west to the county line. Elijah and his sons presumably found the land to be satisfactory, because he and Alva soon returned to Vermont to complete the purchase, while David remained on the land to protect the family’s claim and to wait for surveyors to arrive and lay out the lots. In the process, he became North Olmsted’s first settler. 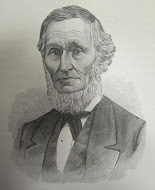 David Stearns lived alone on the land, very near to the present day Fire Station #2, for the next three years while the rest of the family remained in Vermont. David Stearns’ isolation from his family came to an end when he married Polly Barnum, a girl from nearby Ridgeville Township, in 1819. In the decade that followed, the two started their family, and in the same decade David’s younger brothers settled here on the lands purchased for them by their father Elijah. All four of them, like their brother David, farmed lands that ran along Lorain Road.

For the remainder of the nineteenth century, and into the twentieth century, the Stearns were an important part of the North Olmsted community. The Stearns were active in the township government. David Johnson Stearns was elected the first township clerk in 1823. He and his brothers thereafter took turns serving in different township offices. They also were founders of the First Universalist Church. The Stearns brothers lived out their lives on their farms, the last of the brothers, Elijah, Jr., dying in 1891. A number of their children continued to farm their lands into the twentieth century.

Eventually, the Stearns farms on Lorain Road came to an end. With the coming of the Interurban (electric railcars), North Olmsted began to be viewed by developers, not as a place for farms, but instead as a place for residential subdivisions. The Stearns farms along Lorain Road were among the first to be sold to real estate developers. By 1940, there was only one Stearns still farming in North Olmsted. George Stearns, a 71-year old farm laborer, was a great-grandson of David Johnson Stearns, the city’s first settler. His death in 1942 quietly signaled the end of an era for the city.

Asher Miller Coe was born in 1789 in Middleton, Connecticut. He married there, became father to four children, and had a 100 acre farm. Coe decided in 1823, at age 34, to sell his farm and move his family to Ohio. He settled in southeastern Dover Township where he purchased about 1000 acres of land on the ridge, the same ridge along which the Stearns family had purchased land in Olmsted Township further to the southwest. Asher hit the ground running. He built a large house in 1824, and after building this house, he turned his attention to cutting down trees along his section of the ridge and building a road that connected with the ridge road in Olmsted Township. Coe likely did this to create a road to Ridgeville where the closest Universalist Church, of which he was a member, was located.

In the 1830s, Asher engaged in business and other activities that grew that ridge community. He added a tavern and a store onto his house to serve travelers and the nearby population. Coe became a cofounder of Olmsted Township Universalist Society which had as its initial members many of the pioneer settlers from both Olmsted and Dover townships, including David Johnson Stearns and his brothers. Asher also started a dairy farm that became one of the largest in the region. And finally, he almost certainly was behind a mysterious annexation of territory in Dover Township to Olmsted Township (first granted and then canceled a year later by the Cuyahoga County Commissioners) that presaged the formation of North Olmsted sixty nine years later in 1908.

The failed annexation didn’t seem to hurt Asher politically, as one year later, he was elected to another term as Dover Township trustee and then elected by the Ohio Legislature as a Cuyahoga County Common Pleas judge. While the annexation of 1839 foundered and southeastern Dover Township and northern Olmsted Township were not permanently joined together during his lifetime, Asher Coe, without question, did more than anyone else in our early years to create a single community among the people living on the ridge. His dream of more firmly uniting the ridge community didn’t die when he died in 1867. Another Coe soon came along who picked up where Asher had left off.

Leon Melville Coe was born in Dover Township on November 5, 1845. He was only 5 years old when his father died in a hunting accident. Judge Coe must have been a positive influence on Leon, because in many ways Leon seemed to have inherited his grandfather’s talent, business acumen and boundless energy. In addition, Leon also seemed to be what we would today call a people person. 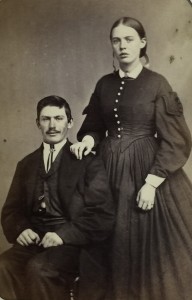 As a young man, Leon farmed his grandfather’s lands and became active in Dover Township politics. But in 1886, he moved to Berea, where he purchased his brother-in-law’s interest in a feed store. In the 1890s, while managing the feed store, Leon also became one of the founders and managers of the Cuyahoga County Fair. He was elected to Berea Council, serving several terms. Leon also became a business partner of Alson Pomeroy, the Berea banker who formed the Cleveland & Berea Railway in 1893. In 1894, Leon obtained a 25-year franchise to build an Interurban line from Cleveland to Elyria, and soon after, influenced the route of the line to cross through present day North Olmsted, along the same ridge road upon which his grandfather Asher decades earlier had settled and built. Within a year, Pomeroy and Coe’s new company had built a bridge across the Rocky River Valley and then had laid tracks from Kamm’s Corner westward, establishing trolley service from Cleveland to Elyria. On December 15, 1895, the Interurban made its first run between the two cities.

The Interurban had an almost immediate impact on the ridge community in Dover and Olmsted townships. In 1895, Cleveland had just become Ohio’s largest city. Western Cuyahoga County was the breadbasket for this growing urban population and local farmers trucked their products to the market place. The bridge across the valley built by Coe’s company shortened the trip into Cleveland considerably. Interurban service induced residents of the ridge to become consumers in the regional economy by providing transportation into the city that was cheap and quick. Retail stores also sprouted along the line. Even more firmly than his grandfather had, Leon Coe literally laid the tracks to transforming into a single community the people living on the ridge in northern Olmsted Township with those living on the same ridge in southeastern Dover Township.

In the summer of 1908, residents from the two townships held meetings on the subject of forming their own village. In Dover Township, a movement had begun in 1900 to detach a large area along the lake which would become Bay Village in 1903. In northern Olmsted Township, residents on Butternut Ridge had already been fuming for half a century over their township’s decision in 1856 to move town hall to the village of Olmsted Falls. There was also a perception, which grew over the decades that followed, that too many of the township’s tax dollars were being spent in and around Olmsted Falls, neglecting the northern part of the township. Things came to a boil at the end of 1905 when residents voted down a bond issue that would have financed improvements in the northern part of the township.

At those meetings in 1908, a leader of the movement to form a village soon emerged. George Orman Willet was a Cleveland lawyer, and like Leon, he was a Republican and active in the business community. On December 8, 1908, Willet was elected North Olmsted’s first mayor. By all accounts, he was a good mayor, serving in the office from 1909 to 1915. In the same year that Willet was elected mayor, Leon Coe was elected mayor of Berea and later served as a State Representative to the Ohio Legislature. When his term ended in 1914, Leon moved back to North Olmsted, into a house on Lorain Road just west of Columbia Road that most likely had been built by his father in the 1840s.

In 1915, George Willet declined to run for reelection. Leon Coe ran instead, narrowly defeating his opponent to become North Olmsted’s second mayor. Coe served a total of six terms as mayor of North Olmsted during the period 1916-1929. At 84 years old, Leon retired from politics. On January 26, 1931, he died at his home on Lorain Road, thus bringing to a close the story of the grandfather and his grandson who shaped North Olmsted as we know it today.